This year we celebrated our 10th annual SAUMA Conference. It was held at The Campus in Bryanston and the attendance was excellent, with well over 400 delegates present. The speakers were dynamic with some dropping explosive bits of news that you probably wouldn’t hear elsewhere. Overall, the calibre of this year’s SAUMA speakers raised the bar even higher.

There was something for everyone, including an update from its chairman, Steve von Roretz, on what SAUMA had achieved in the past 12 months. Last year, as he said, he felt the legislation was not fit for purpose and this year he had similar concerns. He added that the current legislation has UMAs confused about their roles and that the increased use of technology in the sector would make the lines even more blurry between the broker, the insurer and the UMA.

He emphasised the need for professional accreditation in the industry as it would help everyone understand their own value and he was committed to the continuing discussions with various bodies in the sector. He felt that this would assist UMAs to become better defined in the roles they performed.

Charmaine Kock, Managing Partner of AC Develop, who has worked in industry for 15 years, spoke briefly on CPD initiatives, announcing that SAUMA had bought into their online record-keeping system, and that 3.5 CPD hours could be attained at this SAUMA event. View the SAUMA CPD Portal here .

Charmaine then clarified the difference between professional CPD and regulatory CPD points. She said that the FSCA excluded product training and qualification studies from their CPD requirements.

The next speaker was Paul Carragher who aimed to paint a picture of what insurance would look like by the year 2030 with his talk entitled “The 10X UMA”. He approached his talk in the manner of a fireside chat and was joined in the discussion by Graham Thurston. Graham said he would ask Paul the tough questions about everyone’s role in the future of insurance. The audience participated in a live and interactive poll.

Paul and Graham agreed that the two ideas of the future were either the picture of the utopian smart-city or the darker dystopian anarchy of inner-city slums, where ultimately, the rise of the machine meant joblessness.

In a polled question, the vast majority of the audience agreed that technology in their business was absolutely necessary: they had to keep learning, remain curious and embrace change.

In the future, Paul (who has launched four insurtech companies) said the customer is going to want a simple product and to understand exactly what are were getting, coupled with a simple claims process.

He emphasised that collaboration between insurers and UMA was critical and ended off by saying that UMA’s future considerations must include breaking down the silo mentality, embracing technology and assessing the value chain. The value of UMAs in the future of insurance, Paul said, was their deep expertise and specialist knowledge, coupled with their entrepreneurial spirit.

The courageous and explosive Daily Maverick journalist, Pauli van Wyk, took to the stage next, where she revealed details on her investigations into the VBS and SARS scandals. 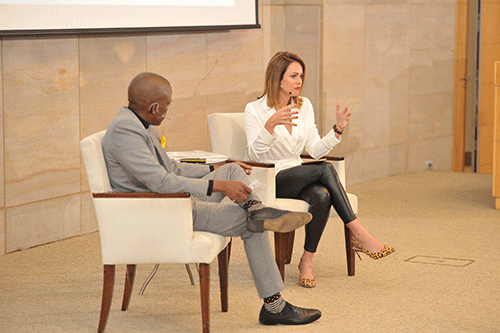 In the past, her findings were so illuminating and dangerous that she was referred to as “Satan” by a certain political leader. She revealed how around R2 billion was stolen from VBS bank. It had effectively been robbed into insolvency.

She was able to make these claims as she had seen the bank statements and WhatsApps herself; the transactions were so blatant and crude that one did not even need to be an auditor to spot them. She described how the chief of the “robbing operation”, the chairperson of VBS bank, Tshifiwa Matodzi, received R1 billion, and that R20 million went to the EFF, and a KPMG auditor also received R35 million. She described the modus operandi of robbing an institution like VBS, and detailed the creation of false spreadsheets and ghost entries.

Pauli then described what she’d learnt from from her investigations into SARS; how it was essentially hollowed out and broken; a campaign that began with consultations lasting two years, when a representative from Boston-based consultancy firm, Bain & Company, met with President Zuma to discuss the appointment of Tom Moyane. What followed was 2 000 highly skilled SARS employees being removed, leading to a crisis in the revenue collection numbers.

She felt that South Africa had its heroes, however, and that what was hidden had now been revealed, thanks to the good people in this country.

Up next was Lizelle van der Merwe, CEO of the FIA, who unpacked the exciting developments from the Public and Private Growth Initiative (PPGI). This is an initiative led by Johan van Zyl, Roelf Meyer, Nic Binnedel after President Ramaphosa’s 2018 SONA address. The aim is to build trust again between Government and the Business Sector, and to attract R100 billion in foreign and domestic investment. The FIA’s project, Insure SA, was one of 18 projects that received the green light from the President as part of the PPGI.

Lizelle stated that if the economy did not grow, the financial sector would not grow, and all stakeholders agreed that financial services played a vital, catalytic role across the entire economy.

The positive news was that there was a willingness from Government to work with Business. Lizelle ended by complimenting Steve von Roretz for the excellent discussions he’d been having with the various bodies since he’d taken over, and for the progress made.

Samantha Williams, Head of Legal & Regulatory Affairs at the FIA, was next and spoke about regulatory issues that concerned brokers. She looked at COFI, stating that is was not just a replacement for FAIS, but had a far wider reach and included banks, insurers, investment schemes, debt collections etc. She stated that TCF would continue to be emphasised.

In discussing CPD, she alluded to the looming deadlines for the prescribed number of hours, stating that attaining these was critical in further professionalising the industry. Samantha added that they have a number of face-to-face and online programmes to assist brokers.

Samantha also mentioned that FIA and FCSA have compiled a paper on the future regulatory framework for premium collection. The new legislation on premium collection that would take effect from the 1st of September, 2019, should encourage us to look at different models of premium collection and not to take a one-size-fits-all approach. 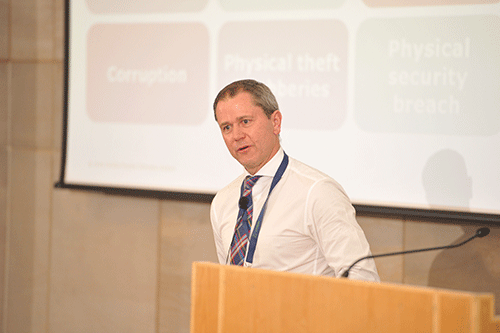 Marc Anley, a Partner at Deloitte, spoke on the impact of financial crime, which of course has become a reality for South Africans.

He stated that financial crime was a 2.1 trillion US Dollar industry and in many cases was used to fund terrorism. Types of financial crimes were cash heists, money laundering, illegal trading, corruption and cybercrime. Many of these crimes were linked to human trafficking and modern-day slavery, which affects around 40 million people globally.

He is currently conducting a study of the non-life sector as a risk of financial crime. He mentioned that he would be sending questionnaires soon, and requested that all stakeholders participate as it would aid his investigation and ultimately benefit the entire industry.

Dr Thabi Leoka was the next speaker; a phenomenal economist who obtained her PhD from the School of Economics in London, and forms part of the team that regularly advises the President on the state of the economy. She had spent the past six months being part of the PIC Inquiry, as President Cyril Ramaphosa and Gill Marcus (former Governor of the Reserve Bank) personally requested her involvement. 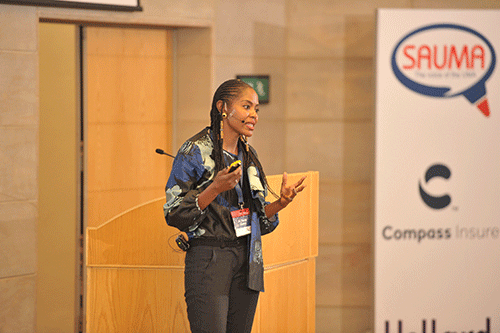 On the current state of the economy, Dr Leoka said that there were indeed nine wasted years where growth had never been over 2%. She likened our economy to a Lamborghini with the engine of an Uno. She also stated that although reform was difficult, it was vital and gave the example of how in the recent past, Brazil had reformed their economy and had reduced unemployment to around 4%.

Dr Leoka reminded the audience that South Africa had excellent economic policies that just need to be correctly implemented. Our biggest challenges remained poverty, inequality and unemployment. On unemployment, she went into detail as to the extent as well as how the current education system was not geared toward solving the dilemma. The solution, she said, was in growing those sectors of the economy that were tradeable and would create the most amount of jobs; that being agriculture, mining, manufacturing and tourism.

When it came to quick reforms and low-hanging fruit that could inject some impetus into the economy, four key areas were highlight by Dr Leoka. Firstly, changing the visa regulations that made it difficult for visitors to travel to South Africa with children would immediately encourage foreign interest in SA. Increasing South Africa’s spectrum/ bandwidth efficiency is also something that could assist all citizens, especially those living in rural areas, as this would give them the ability to apply for jobs and communicate using cheaper or even free data. Reforming the health sector was also critical as was reducing the number of government employees, which is a drain on the fiscus.

She declared that if President Ramaphosa could do just one thing, it should be to be the leader that put an end to corruption, as the economy would then be given the chance to restore itself. 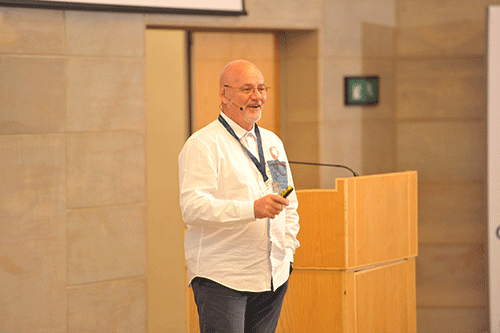 Bryan Hattingh, a personal development coach who has helped many blue-chip companies, was the final speaker, and looked at surviving and thriving in the exponential world. He opened with the sentiment that “business as usual” would not work in the future.

The key was to know that in the futuristic world of technology and machines, humans will be very important as machines are good at “simulating” but not good at “being”. Technology represents the “how” of change, but humans represent the “why”.

Addressing the pursuit of our destinies, Bryan cautioned against the paradox of the success trap; that the companies most likely to fail are the successful ones. He said that instead of pursuing perfection, we should pursue excellence, as it allowed for human error. We should also not focus on attaining a perfect work-life balance, but on priority, as balance would naturally follow this.

On a personal level, he warned that the inhibitors to progress were comfort and accepting the status quo. He said that in looking for the new solution, the starting point needs to be YOU. More specifically, we need to see ourselves as a “YOU Pty Ltd”. We also need to ask ourselves, “Are we driving change or being driven by it?”.

He closed off by encouraging us to celebrate the victories and shared a remarkable story of a friend of his that survived multiple gun shot wounds, despite the prognosis being death.

After the presentations, a sumptuous lunch was enjoyed in the Oakhurst Insurance marquee with a special word of thanks to them for filming the conference and capturing the valuable insights from the day.

SAUMA would like to thank the sponsors of the event.